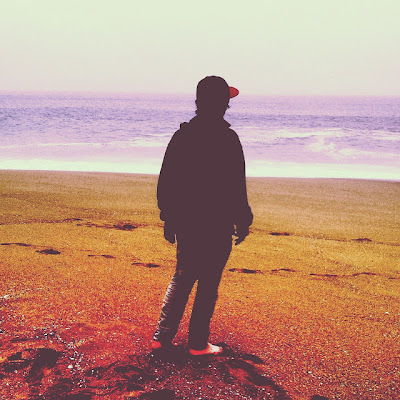 Again today he waits. He hopes. It could be today. The pink hue of the ocean makes him cold inside. The air has the coolness of fall and even the sand requires shoes to be comfortable. Comfortable. No, he won't be that until it happens. Looking far out, as far as the horizon, for a bump, for a light, for a flash. Anything that interrupts the smooth line of sea meeting sky. It could be...

The same thoughts every day for months now. Three months and 2 days to be exact. The ship sailed for China from San Francisco Bay and had been expected back for nearly 3 weeks. On that ship was the boy's uncle who happens to be his best friend, also.


Uncle Frank had no children of his own and had been an integral part of Aiden's life since birth. Uncle Frank was his mother's brother and often stayed with their family when not out to sea. He had a small cabin of his own down the California coast a short ways, but he rarely stayed there unless he was going to be in town for a month or more. He had become Aiden's best friend almost from day one. He would hold him, rock him and walk with him by the hour to soothe Aiden's tortured body. The boy is autistic and often required having his cradle rocked with no human hands on him. Other times, he required bunting and big warm arms holding him safely still. Uncle Frank knew all the secrets and seemed to know which was needed. Mom and Dad loved the way he related to this special and troubled baby and trusted him to provide care for their infrequent dates.

As he grew, he learned and his parents learned and life did get somewhat easier. Aiden is an only child and now at age 13, he stands alone to wait. He knows the days have passed too far. He knows Uncle Frank should be here now. He cannot wait at home. He needs to go to the seashore and look for himself. When the sun has set, he will turn where his dad waits for him, a safe distance away, and together hand in hand, they will walk back home. Aiden may talk non-stop about how many days it's been and how long it takes to make the turnaround and how long the lay over was and what might have gone wrong. He will talk about the length and speed of the ship because he is an expert. Other nights they will walk in silence. On those nights his dad worries. He doesn't know what is going on in Aiden's head and it worries him. He doesn't want him to be sad, rather he talk himself into security. Feeling whatever has gone wrong is going to be a great adventure that Uncle Frank will tell them about for many years to come.

For Aiden, life cannot return to normal until Uncle Frank comes home again. When he walks up the sidewalk and through that front door to big hugs and maybe a surprise for Aiden, then and only then will life be right.

Most of us have safe places and for Aiden it is in Uncle Frank's presence. Anywhere in the world.

Daphne suggested this picture as our inspiration today...and I was inspired. Go check her enty here. Click!!

This is a BlogFEST entry....Read more by clicking here
Posted by Jo at 11:49 PM

I really want to know that YOU were here...please drop me a note or just say Hi ~ I do love a comment and it keeps me motivated!

You write and I will answer. Eventually. Show the love!